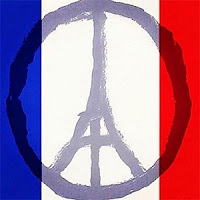 First thoughts to the French and all those touched by the dreadful events there. Although I'm not a soccer aficionado I could not help but be positively moved by the goodwill of the France v England match. Humanity can be so strong in the face of terrorism.

This week I was at Clearing and Settlement World. Good to catch up with may familiar faces and some new ones too. I spoke on Bitcoin. (I'll put the slides up on this site under the blockchain tab).

I started blogging for a variety of reasons. One of them was that blogging on an article would force me to have an internal discipline to formulate an opinion on what I read. We're all bombarded with news but I wanted to force myself to digest and comprehend more than the vanilla message of corporate communications.

And so to Blockchain and Bitcoin. I felt I was just regurgitating links. So, I've been immersing myself into Bitcoin to better understand the rise of the blockchain. And I have some conclusions on Bitcoin that give me some context to shape my opinions (of course I reserve the right to change my opinions as new information comes to light or indeed as and when I'm corrected). Hence a lot of background articles in this blog post.

Bitcoin gets a bad rap. Black market money like Silk Road and trading scandals like MtGox.  So what? Hard or fiat currency has always been used for crime (at least from what I gather from the movies). Why is digital currency any different? We're all familiar with trading scandals. Nick Leason is vermin...that does not mean Barings and derivatives are bad. I like Bitcoin (BTC).

Bitcoin has got problems.
1. Bitcoin relies on a code base. Those people that maintain and support that code base are not economically aligned with the success of bitcoin. At best, the great work of Bitcoin is supported by the Bitcoin Foundation (much the same as Wikipedia).
2. Bitcoin is slow. Not only is it slow, it is positively lethargic. Bitcoin relies on new blocks being validated every 10 minutes.
3. Bitcoin is expensive. Bitcoin ain't going to fix our micro transaction problems. (When I say expensive I do so in the context of transaction fees).
4. Bitcoin is not green. I think it is an environmental nightmare. There are various estimates, but one conservative academic paper I read put the consumption of electricity of Bitcoin miners on a par with the daily power consumption of Ireland (i.e. the country, not just a small island).

None of this is new and consensus is that the Blockchain, the Bitcoin enabling technology is the way to harness all that is good in Bitcoin. So we can focus on the commercial applications of the blockchain.
...and there is a funny thing. The blockchain is all about a open, publically shared ledger (OK, you can have a private ledger, personally I think we'll end up with consortium ledgers where regulators have a lens to see all activity). And then you go to all these web sites to try and get underneath the mechanics of the technology application and all I can say is details are scarce. I used to moan about Central Market Infrastructure transparency of pricing but at least you could down load their rulebooks and circulars.

Whatever your pleasure, go about it this weekend unreservedly but respectfully. (I went to see a couple of emerging live bands last night).


Economist article on blockchain.
* Note if you're not a subscriber it may want you to register.
The article is good, but I would say generalist. Nothing revolutionary here.
http://www.economist.com/news/briefing/21677228-technology-behind-bitcoin-lets-people-who-do-not-know-or-trust-each-other-build-dependable?frsc=dg%7Ca

SpectroCoin.com (http://spectrocoin.com) users in London are able to spend bitcoins at a number of restaurants and coffee shops around London. This can be done due to SpectroCoin integration to a WoraPay platform.
http://www.coindesk.com/press-releases/spectrocoin-aims-to-become-a-leading-uk-bitcoin-wallet/

...and a nice Bitcoin timeline of events.
http://stanford.edu/~eaortiz/cs181report/history.html

Some of Karples initial online dialogue after taking over at MtGox.
https://bitcointalk.org/index.php?topic=4187.0

Coal is dead? No one told ChinaThis one from real world mining.
http://www.mining.com/coal-is-dead-no-one-told-china/

...The first participants will include: Chain.com, ChangeTip, PeerNova, Synack, Tango and Vera....
....Nasdaq recently announced it will undertake an effort to manage proxy voting via blockchain technology in Estonia, as its next proof-of-concept for the company's blockchain initiative....
http://www.nasdaq.com/press-release/nasdaq-announces-inaugural-clients-for-initial-blockchainenabled-platform-nasdaq-linq-20151027-00986#ixzz3s3N6a163

Dyson on innovation.
“Creativity should be thought of as a dialogue. You have to have a problem before you can have the game-changing riposte.”(otherwise referred to as the "problem phase” of innovation).
Personally I subscribe to the 3 phase model of innovation:
1. Tinkering and refining Day to Day processes; (run the bank)
2. Thoughtful restructure or re-engineering of processes; (change the bank) and
3. Implementation and adoption of disruptive technologies.
https://www.linkedin.com/pulse/please-more-brainstorm-sessions-how-innovation-really-matthew-syed?trk=hp-feed-article-title-hpm

Clever advice on how to use your settings
https://www.linkedin.com/pulse/describe-your-career-six-words-less-bruce-kasanoff


Emotional Intelligence
I'm a big believer in EI. This article, due to the bullet points, is interesting, but I don't think it totally nails the topic, hence it doesn't inspire me to buy the book they're promoting.
https://www.linkedin.com/pulse/importance-being-genuine-dr-travis-bradberry?trk=prof-post

The tree that is beside the running water is fresher and gives more fruit.
Saint Teresa of Avila

“The harder the choice, the less important it is”

The little blog that I send out is just a way to stay in touch with family, friends, industry contacts, prospects and customers.
It’s a real mixed bag.
I just got so busy I never had time to give the attention I should to all the different groups.
I also hated calling people up to ask a favour when I hadn’t been in touch for x months (or years).
Hence the blog – basically it says I’m alive and what I’m interested in (C&S – and more C than S).
I do it when I can, as I can. Sometimes I just don’t read anything if I have a deadline to meet.

Scott Riley
A securities transaction usually starts with a trade being made via an exchange, on an electronic order book, a multilateral trading facility (MTF), or in the OTC (over the counter) markets. Clearing is performed via a central counterparty (CCP) which guarantees both sides of a trade thereby removing counterparty risk (the CCP is a buyer to every seller and a seller to every buyer, a process referred to as novation). Novation facilitates the netting process. Orders may or may not result in multiple trades. A CCP nets all the gross trades in a given instrument to generate a single net settlement instruction (netting greatly reduces the price sensitivity of traders to the settlement process). CCPs protect themselves against default risk through the application of margins. Settlement (finality of the change of ownership process) occurs at a central securities depository (CSD) through the DvP or Delivery versus Payment process. The CSD also provides custody and associated services. Custody consists of the physical and electronic safekeeping of securities, providing corporate events services, and paying dividends and coupons.